A beautiful and large tricolored tourmaline from the famed Himalaya Mine in Mesa Grande, California; 5.15 carats.

The Himalaya Mine in Mesa Grande, California is world-famous for its production of gem-quality multi-colored tourmalines.  First discovered over 100 years ago, it rose to prominence in the early part of the 20th century, supplying tourmaline to the Dowager Empress of China.  When she passed away and the Boxer Rebellion ensued, the Chinese market for tourmaline collapsed and the mine became inactive for a long time.  In the 1980’s and 1990’s Pala International once again operated the mine, producing large quantities of tourmaline, but once again the mine is mostly idle.  Currently there is only minor hand mining done in the old tunnels, finding pockets passed over by the more recent work.  This gem comes from some of that mining; this rough was mined in late 2015 from a small pocket.

Bicolored tourmalines look best when faceted with simple designs that highlight the colors and don’t blend them.  A simple emerald cut does the job, although the angles have been optimized for tourmaline to maximize the brilliance.  This would make a gorgeous stone for a simple pendant as the shape is elongated to follow the natural shape of the original gem crystal.  While the photo does not show it too strongly, the gem fades from a dark magenta pink to a pale yellowish-green, with a zone of pink in between.  The gem weighs 5.15 carats and measures 20.3 x 5.4 x 4.9 mm. 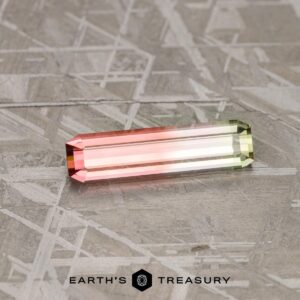